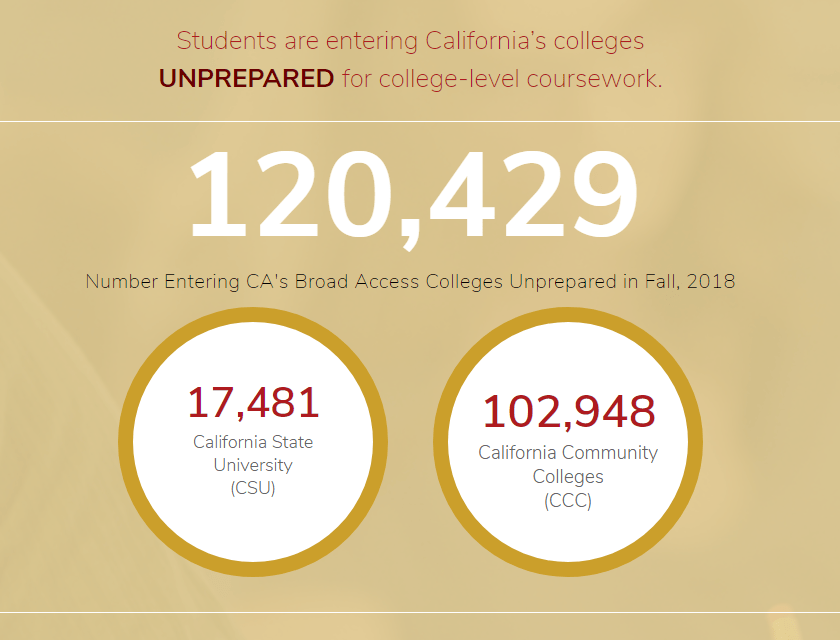 Arriving to college unprepared for college-level coursework has been a barrier to college completion for decades. Historically, students were required to take a sequence of one to four “remedial” prerequisite classes that did not count toward degree completion. The impact of remediation on college completion is suggested through public data available through the California Community College’s Statewide Student Success Scorecard. The Scorecard data from 2018 shows that of the 158,678 students whose first math course was remedial, only 36.5% completed a transfer-level math course within six years. This statistic remained similar over time. Looking back four years, the college-level math completion rates for unprepared students ranged from 30.5% to 34.2%.

Publicly available data from the CSU provides a different view of the impact of remediation.  Executive Order 665 requires all students to achieve proficiency in mathematics by the end of their first year of enrollment. As such, remediation was tracked in terms of year one retention (find proficiency reports here: http://asd.calstate.edu/performance/proficiency.shtml). While the remediation rate varied greatly by campuses from a low of less than one percent to a high of 68%, across campuses there was an average of approximately ten percentage points between the retention rates of remedial versus prepared students. Within the CSU, broad access campuses with the highest acceptance rates had the highest remediation rates while the most selective institutions had the lowest. Across the system, remediation resulted in thousands of students being dis-enrolled from the universities before their second year.

Both the CCC and CSU systems made massive changes to address the math remediation dilemma in the past few years. Both have mandated the use of multiple measures placing students directly in college-level courses with support in lieu of prerequisite remedial courses. The changes are detailed in a separate blog post.

Large numbers of students still arrive to college unprepared to place directly into college-level courses without support. College Bridge works to vertically align K-12 and higher education in an effort to eliminate this barrier to college completion.