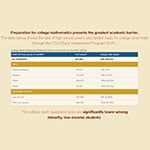 As I began collecting data for my dissertation back in 2010, I noticed a recurring statement from my interviewees who were participants in at least one of six intersegmental partnerships designed to improve college math readiness. The population included administrators, professors, counselors and teachers from K-12 and higher education. The recurring statement, “…but the Common Core is going to fix all of this” was ubiquitous from administrators and professors but not a single K-12 teacher uttered those words.

As a researcher I wondered what impact, if any, the Common Core would have on the college math readiness rates of first-time freshmen. For decades, students who have arrived to college unprepared rarely pass their required math classes. The inability to complete their math requirement prevents students from earning their college degree. Higher Ed, specifically broad access colleges and universities, grappled with the dilemma of low college completion rates paired with students’ inability to pass math courses.  In 2003, the CSU System launched the Early Assessment Program (EAP) to inform students of their level of college math readiness at the end of their junior year of high school. Although not an assessment of the current high school math standards, the EAP included a standardized measure of college math readiness. The math test was optional and only available to juniors in Algebra II or higher math. The chart below shows the outcomes for the 487,505 high school juniors in California’s public schools in 2010. The 2010 statistics had not changed noticeably since 2003 nor did they for the few remaining years of the assessment’s use.

College Math Readiness Rates by Race via the EAP (2010)

College Math Readiness Rates by Race via the EAP (2010)

The data show lower rates of underrepresented minorities in Algebra II or higher, thus lower rates of access to the assessment and paired with much lower college math readiness rates as measured by the EAP. For all students, researchers contended that poor outcomes were due to misalignment between the California Standards Tests (CSTs) of the K-12 Math Standards and the EAP, among other factors (see white paper).

A few years after the roll-out of the Common Core State Standards – Math, came a new assessment called the Smarter Balanced Assessment Consortium (SBAC). The CSU discontinued the current math test and adopted the 11th grade SBAC for the EAP. Unlike the CST that was aligned to the students’ current math course, the SBAC is administered by grade level to all students in grades 3-8, and 11. The 11th grade SBAC is a cumulative high school math assessment with no test given in the 9th or 10th grades. Regardless of current math courses, the SBAC mandates all 11th grade students to take the exam.

Along with the SBAC, the state launched the California Assessment of Student Performance and Progress (CAASPP) system which includes reports of SBAC outcomes as well as all resources associated with the test. The CAASPP scores are organized into four levels: Standards Exceeded (4), Met (3), Nearly Met (2), and Not Met (1). A score in the Level 4 band of the CAASPP is College Math Ready for the EAP.

College Math Readiness Rates via the EAP, by Race and Income (2018)

College Math Readiness Rates via the EAP, by Race and Income (2018)

Given the increased access to the assessment for juniors in math courses below Algebra 2/Integrated Math 3, the dip in Level 4 rates was anticipated. To see change over time, the table below provides data from the new assessment for all four years of implementation for all of California’s high school juniors, disaggregated by race and income.

Year two saw the greatest change with increases for all subgroups except African American. Since the implementation of the Common Core, White and Asian students’ college readiness have improved; however, there has been little noticeable change for underrepresented students.

For the past three years College Bridge has been engaged in an eight-year longitudinal action research project called the Math Pipeline Readiness Project (M-PReP). The project aims to improve college outcomes by aligning math curriculum and assessments among universities, colleges and their feeder high schools. Metrics include CAASPP scores and completion of college math general education requirements. The project includes eight high schools in Southern and Central California.

Findings from M-PReP mimic earlier concerns of misalignment between the EAP and high school curriculum and assessments. Even though the EAP now utilizes the 11th grade SBAC, we found that some of the instructional materials and assessments used in the high schools are poorly aligned to SBAC. The greatest misalignment noted was assessment of the Common Core’s Standards for Mathematical Practice.

In addition to Math Content Standards, the Common Core includes eight standards for mathematical practice that provide a shared foundation for the content standards in grades 3-11. While teachers are aware of the practices and integrate them into their lessons, rarely are the practices explicitly taught or assessed. The SBAC, however, is structured in a way that does assess these standards.

Schools using traditional textbooks that present mathematics procedurally tended to have the lowest scores with students reporting confusion with the SBAC’s style of assessment. Schools using problem-based texts with an inquiry approach tended to fare better. In the latter, misalignment appeared more with specific content standards.

The SBAC is a complex exam and, forgive the analogy, but like an onion. Each year another layer is peeled back with math departments working through that layer before moving to the next. In general, the first layer addressed is Concepts & Procedures as this is foundational mathematical content that can be understood in the traditional way that most teachers learned math. Given that familiarity, it is easy for teachers to remain in a traditional mindset demonstrating step-by-step procedures for problem solving. Students are also accustomed to this style and often demand to be shown how to do it. Facilitating student learning from the procedural to the conceptual is challenging for teachers, especially with students reluctant to engage in the process.

The remaining layers of the SBAC include Problem Solving, Modeling & Data Analysis, and Communicating Reasoning. Students using problem-based textbooks tend to perform better on the SBAC overall, but the style of problems used to assess the math practices still pose the greatest challenge for all students.

We found three efforts at school sites that contributed to gains in SBAC scores. These are (1) focusing on foundational mathematics standards, (2) accelerating students into higher math courses, and (3) intensive test preparation. In most cases, the positive gains were also met with negative side effects for students.

In sites that focused on foundational math standards, students were assessed weekly with teachers incorporating reteaching into their lessons. Students were required to attend mandatory tutoring before school or during an intervention period. These sites had the largest growth between grade 8 and grade 11 CAASPP scores. However, these sites had the lowest pass rates of college-level math classes. The teachers reported that they were not permitted to teach rigorous content and the students were not allowed to fail. The findings suggest the intensive interventions may negatively affect students’ college outcomes.

Across all sites, students in higher mathematics courses beyond Algebra II or Integrated Math 3 outperformed on the CAASPP. However, the schools that permitted aggressive acceleration (defined as taking a full math course over the summer at least two times) had the lowest performance on the AP math exams. Teachers reported that the majority of students who aggressively accelerated via summer programs demonstrated gaps in their mathematical foundations.

The last case is intensive test preparation. This took several different forms across sites but generally utilized the CAASPP resources such as Interim Assessment Blocks (IABs) and Interim Comprehensive Assessments (ICAs). The greatest gains were found where teachers integrated the resources into their instruction and the students practiced the assessments on the computer. Although this was not explicitly measured, more practice appeared to correlate to higher gains.

It is important to note that a myriad of factors accompanied the various efforts at school sites to assess the Common Core and prepare for the SBAC. The findings above are provided as generalizations. 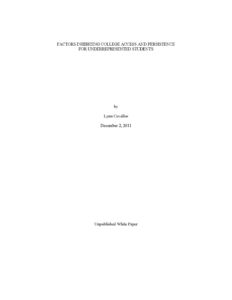